Today we awoke in our hostel, had a quick and light breakfast, and then walked to the Liverpool Docks to see the Maritime Museum. A retired history professor from Liverpool, Mike Boyle, met us and gave an interesting and very detailed account of Liverpool's connection to the Trans-Atlantic Slave Trade. This lecture included incredible facts, such as nearly 50% of the slaves transported to America were taken on Liverpool-based ships.

This lecture gave great background to the permanent floor of exhibits on the history of slavery and African culture, which was partially organized by Professor Boyle. The exhibits featured artifacts spanning the centuries from slaving contracts, to manacles, to traditional African clothing, to displays on food and music. It was an immersive experience and felt like we were traveling through time.

After the Maritime Museum, we were free to wander the city for a bit. I snapped some fun shots of the Liverpool Docks and surrounding buildings and snagged a small lunch at a combination Chinese Restaurant/English Diner. After the small bit of exploration, we hopped back of the bus for a small tour of important Liverpool sights. It was surprising to see that so many streets (including the famous Penny Lane) were named after slave-trade profiteers.

After the tour, I went to the Beatles Museum. Curious? Read the next post, Liverpool Day 2 Part II!

Exhibit From the Slavery Exhibits 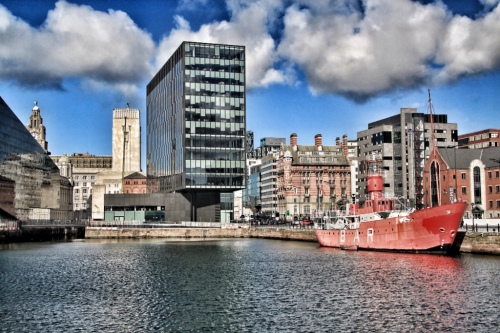